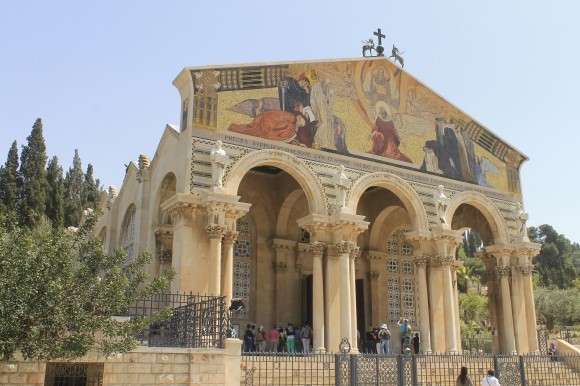 The Higher Presidential Committee of Churches Affairs condemns the attacks on the Church of Gethsemane.

His Excellency Minister Dr. Ramzi Khoury, Director General of the Palestinian National Fund and President of the Committee condemned the attack of the Israelisettler on the Church of Gethsemane in Jerusalem, the occupied capital in an attempt to burn the church down.

This attack is not the first that targets Islamic and Christian places of worship and clerics, especially in Jerusalem. Such as the burning of the Tabgha Church in Tiberias and the brutal attack on the Coptic priestson the entrance of the Church of the Holy Sepulcher, the continuous incursions on Al-Aqsa Mosque, in addition to violence and deportation orders issued against the worshippers.

“These are systematic policies of the occupation and its settlers to weaken the Palestinian Arab presence in Jerusalem. The Israeli government is seeking by all illegal methods to displace the indigenous population of Jerusalem to achieve its goals of full control and Judaization of the city, disregarding all international conventions and resolutions. The residents of the Holy City and its Christian and Muslim visitors face daily humiliations and discrimination especially at times of religious holidays”.

Dr. Khoury called upon the international community and all religious leaders to be firm in their decisions and directions in the face of the discriminations, violence and attacks that the Palestinian people are being subjected to by the occupation, in addition to thedemographic changes especially in the Ibrahimi Mosque in Hebron.

Today, the Palestinian unity ,that has been facing a long and brutal occupation with its Islamic and Christian holy sites being attacked , yet again showed the steadfastness of its Palestinian national fabric when Fadi Nikodem , Hamza and Mahmoud Ajaj ,together defended the church of Gethsemane.

In conclusion ,His Excellency stated that “The occupation must know that we will remain on our land and continue to protect our Islamic and Christian sanctities“.

The story of the Hanin Nassar family

H.B. Theophilos III: Church of Gethsemane attack is another evidence of Radicals targeting churches and their properties