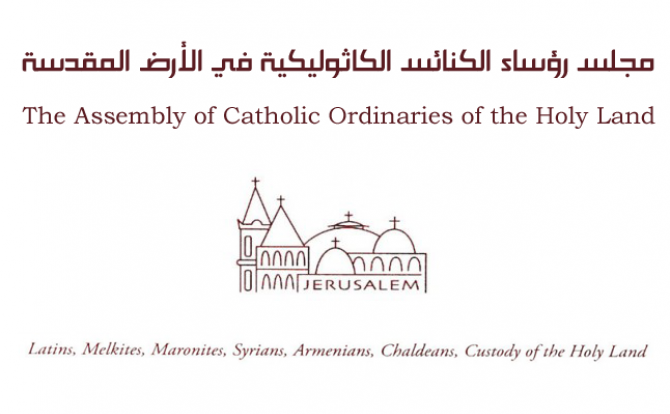 COMMISSION FOR JUSTICE AND PEACE

ASSEMBLY OF THE CATHOLIC ORDINARIES

OF THE HOLY LAND

The Commission for Justice and Peace met in its ordinary meeting on February 3, 2016, in Jerusalem, and reflected on the present political situation. It reflected on the human and ethical aspects, and addressed the following message.

The situation is stagnant and lifeless, with no light of hope, not for the Israelis who need security and tranquility, neither for the Palestinians who wait for the end of the Occupation, and an independent state.

The present situation for the Palestinians is inhuman. It is settlers who occupy, day after day, Palestinian land. It is the siege of Gaza for years already. One and a half million under a siege of poverty, misery and humiliation. It is also siege for the rest of Palestine and diverse hardships, political, economical and social. It is demolishing of homes. It is military check-points and the arbitrary behavior of Israeli soldiers humiliating the Palestinian. These check-points are a place of humiliation which is constructed uniquely on the logic of war, a place that magnifies hatred and death daily. It is the siege of Jerusalem and the Judaization of the city, the sending away of its Palestinian inhabitants. It is the all-inclusive accusation of terrorism against all Palestinians and the collective punishment that results from it. Today the situation has become a new Intifada in which Palestinians plunge to their death out of despair caused by a life full of frustration, humiliation and insecurity, with no hope at all.

We see that the situation is inhuman and cannot be what the Israeli would choose, neither the Palestinian. Change must take place. We say to the leaders: act for the sake of the human being, the Israeli and the Palestinian. Do not leave the situation as it is, because it is a situation that leads to death. Do not say: Palestinians are terrorists. Palestinians are people who seek to live a normal life, instead they find themselves oppressed, frustrated, deprived of the freedom God has given them. You, Israelis you want to live in security and tranquility. The Palestinians also want to live the same kind of life. What is the obstacle preventing this? Political leaders? Or their incapacity to find a practical solution that corresponds to the desire of the Israelis and the Palestinians? Both peoples can live together in peace and tranquility

We say to the Israelis leaders: enlarge your vision and your hearts. Change the situation. Shake it out of its immobility. There is enough space in the land for us all. Let all have the same dignity and equality. No occupation and no discrimination. Two peoples living together and loving each other according to the way they choose. They are able to love each other and to make peace together.

To the Palestinian leaders, we say: let the people hear, let Israel and the world hear one unique voice, a voice of peace and justice for two peoples. Redeem the land again and begin a new history. Redeem Jerusalem again, and begin a new history that conforms with its holiness and universality. Stop every self-interested vision and all corruption.

Our land is holy, and the place of our daily living together. Let the two peoples live together in peace.