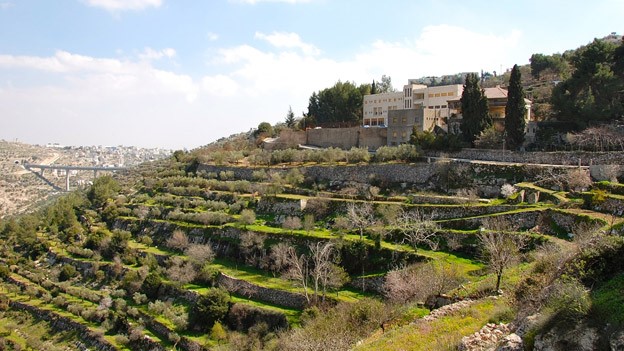 Press Release for Immediate Release
April 2nd, 2015
Following a 9 year legal battle: the Israeli High Court Accepts the Cremisan Petition and Rejects Building the Separation Wall in the Cremisan Valley
The Israeli High Court delivered its final decision on the Cremisan valley case this morning, Thursday the 2nd of April 2015, in favor of the petition against building the separation wall in Cremisan, after a legal battle that has started in 2006. The residents of Beit Jala whose privately owned lands were to be confiscated by building the wall appealed the Israeli Court in 2006. The Society of St. Yves later joined the appeal representing the Salesian Nuns Convent.
The ruling which was delivered by a committee consisting of the former Chief Justice of the Israeli High Court and two other judges, accepted the petition and requested the state to consider other alternative that are less harmful to the local population and the Monasteries in the Cremisan Valley. The Court confirmed that the planned route as suggested by the Israeli Ministry of Defense is not the only alternative which could ensure security and cause the least harm possible as requested by Israeli administrative law. However, the Court wasn’t convinced that the alternative put forward by the petitioners in building the wall closer to the Green Line is any better than the Army’s planned route or that it will ensure security. The alternative presented by the petitioners was put forward by the Security and Peace Commission, an Israeli organization consisting of former Israeli Army officers and generals.
The Court also indicated that the alternative put forward by the Israeli Ministry of Defense last year whereby the two Monasteries would be connected by a gate in the wall and fencing either the street connecting between both Monasteries or the street and the Monks Monastery was problematic.
The Court also ruled that the Military Commander has to reconsider the planned route. One of the two judges added that in his personal opinion, any future plans should ensure that both Monasteries in the Cremisan valley should remain connected and in the same time both Monasteries should remain connected and accessible to the local community in Beit Jala. This suggests that both the Monasteries should remain on the Palestinian side of the wall.
In practical terms, the decision means that the separation wall will not be built as planned for by the Israeli army. The planned route was designed to confiscate a huge share of the privately owned lands of the people of Beit Jala in Cremisan as well as Vatican church land owned by the two Salesian Monasteries. The planned route was to further separate both Monasteries from each other and from the local population they serve. The ruling requested the military commander to consider new alternatives that are less harmful to the local population and the Monasteries. The Israeli military will have to issue a new military order for any future plans to build the wall in the area, whereby the local population can submit a new appeal.

Uncertainty about the Fate of Christians Held Hostage by Jihadists