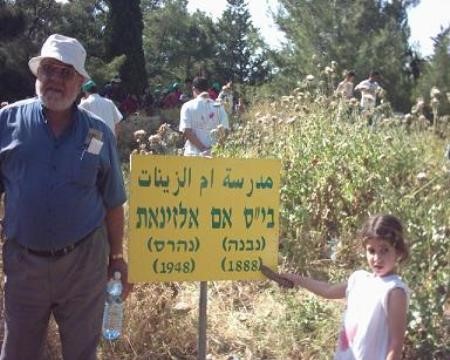 Umm al-Zinat is a village that lies on the top of a cliff in the south-eastern part of Mount Carmel. It was a Palestinian Arab village in the Haifa sub-district. It was depopulated during the 1948 War on May 15, 1948. It was located 20.5 km southeast of Haifa. In the late nineteenth century, the village of Umm al-Zinat was built with stone shaped like a saddle on a hill. It had a population of almost 350 people who planted on 25 acres of land (between 100-250 dunums).

Umm al-Zinat was one of the largest of ten villages in the judiciary system, in terms of population density (1450 Muslims and 20 Christians). The village contained stone-built homes, which were clustered together. In 1888, during the reign of the Ottomans, elementary schools were established for boys.

The villagers gathered water from several wells for domestic purposes. Their livelihood depended on poultry farming and agriculture, in order to plant grains, vegetables, and fruit trees. In 1943, an area was allocated from the land (1843 dunums) for olive production. In the judiciary system, it was considered the largest land for the production of olives. Moreover, Umm al-Zinat contained four handmade olive presses. The village was famous for its trees; olives, grapes, cactus and pomegranate. It had four grapes’ mills and many olives’. People lived out of farming, trading and selling. To keep the village safe from intruders and unwanted animals, farmers surrounded it with cactus trees which can still be seen even today.

In 1944/1945, a total of 9879 dunums were allocated to grains, 1742 dunums were irrigated or to be used for orchards. It was in the same village that ancient phenomenon was found, including the foundation of buildings and graves.

Umm Al Zinat was occupied in May 15th 1948; a few hours after Israel issued its Declaration of Independence. People were kicked out and the village was destroyed the next day. People tried to stay close to their homes at first and return at night to get their belongings, but they were not allowed in and were eventually kicked out for good. The village was completely destroyed in an attempt to wipe it off of the map and erase its history. The only thing that is left of the village are the rubbles of the houses, two wells which served as the main source of the drinking water and the trees which have defied time and are still hanging in and carrying the dream of return for its people. Along with more than 400 other Palestinian villages, Umm al-Zinat was entirely demolished by the Israeli army to prevent the refugees from ever returning. Children held aloft colored placards bearing the names of all the destroyed villages, while others waved Palestinian flags, an act of defiance that could potentially land them in jail.

People who used to live in Umm Al- Zinat are now living in different places in Palestine. The people of Umm Al Zinat have no documentations that could prove their ownership of the land and therefore they cannot go back to their village. Also, the village has no grave yard, and the dead were buried in Daliat El Carmel. Back in the day, the “chief” of the village, which is called “Al-Mukhtar”-the chosen one in Arabic, used to decide how the land should be divided between the families and so to the people, his words were the law. The Jews tried to buy pieces of the land before 1948, and those who did made the villagers sign a document of ownership to make them official owners of the land in the eyes of the law.

Pope Francis: “It’s not right to identify Islam with violence”

Mount of Temptation or Monastery of the Temptation