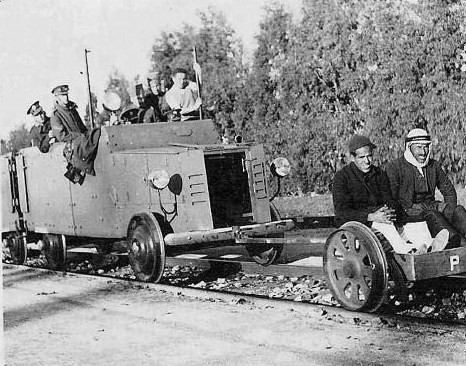 The 1936–1939 Arab revolt in Palestine was a nationalist uprising by Palestinian Arabs in Mandatory Palestine against British colonial rule, as a demand for independence and opposition to mass Jewish immigration.

The revolt consisted of two distinct phases. The first phase was directed primarily by the urban and elitist Higher Arab Committee (HAC) and was focused mainly on strikes and other forms of political protest. By October 1936, this phase had been defeated by the British civil administration using a combination of political concessions, international diplomacy (involving the rulers of Iraq, Saudi Arabia, Transjordan and Yemen and the threat of martial law. The second phase, which began late in 1937, was a violent and peasant-led resistance movement that increasingly targeted British forces. During this phase, the rebellion was brutally suppressed by the British Army and the Palestine Police Force using repressive measures that were intended to intimidate the Arab population and undermine popular support for the revolt.

According to official British figures covering the whole revolt, the army and police killed more than 2,000 Arabs in combat, 108 were hanged, and 961 died because of what they described as “gang and terrorist activities”. In an analysis of the British statistics, Walid Khalidi estimates 19,792 casualties for the Arabs, with 5,032 dead: 3,832 killed by the British and 1,200 dead because of “terrorism”, and 14,760 wounded. Over ten percent of the adult male Palestinian Arab population between 20 and 60 was killed, wounded, imprisoned or exiled. Estimates of the number of Palestinian Jews killed range from 91 to several hundred.

The revolt in Palestine was unsuccessful, and its consequences affected the outcome of the 1948 Palestine war. It caused the British Mandate to give crucial support to pre-state Zionist militias like the Haganah whereas on the Palestinian Arab side, the revolt forced the fleeing into exile of the main Palestinian Arab leader of the period, the Grand Mufti of Jerusalem Haj Amin al-Husseini.