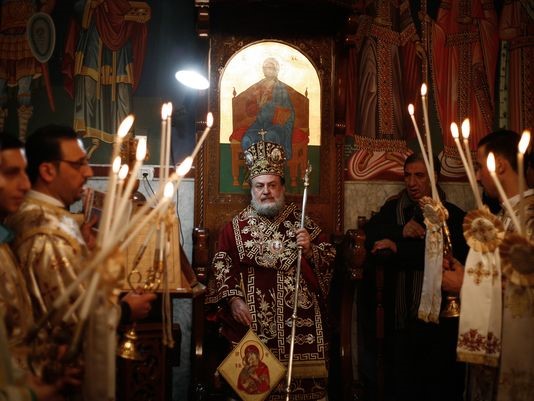 After 2,000 years, Christians disappearing from Gaza

Dim lighting and candles softly illuminate decorative tapestries as the smell of incense fills the air and the harmonic sound of hundreds singing in unison drifts onto a busy street next to an overflowing church on a wet and windy Sunday morning.

Despite the packed pews at Gaza’s Church of St. Porphyrius just weeks before Christmas, Christianity is not booming here. Rather, the worshipers at the 1,600-year-old shrine believe they may be the last group of Christians in Gaza, where they have lived and prayed since the birth of Jesus.

The ongoing Israeli blockade of the Gaza Strip and the highest unemployment rate in the world are prompting Christians to leave the besieged area in droves, some using the holiday season to their advantage.

Although Israel rarely grants permits to leave the Palestinian territory, dozens of Christians are allowed to visit Bethlehem and Jerusalem during Easter and Christmas, and some take the opportunity to never return home so they can start a new life elsewhere.

Today, the population that once spanned 3,000 Christians in Gaza just a few years ago has been reduced to 1,200, and worshipers say the area could be entirely devoid of the religious denomination within two decades.

“People might think we’re leaving because of Hamas, but no it’s because of … (Israeli) policies on Gaza,” Jaber Jilder, an official with the Greek Orthodox Churchsaid, referring to the militant group that governs Gaza and is labeled a terrorist organization by the United States and others.

Israeli sanctions on Gaza have made freedom of movement and goods almost non-existent, and have contributed to an economy that the World Bank said is on the “verge of collapse.” A United Nations report this year said the 2014 Israeli-Hamas war and the current blockade will make the Palestinian territory “unlivable” by 2020.

Israeli Prime Minister Benjamin Netanyahu has frequently defended the blockade, saying it stops weapons from being smuggled into Gaza and to Hamas.

“Most of our community have no opportunities. There are no jobs, especially after university,” Jilder said. “I hear this Christmas about 50 people will leave Gaza … but they won’t return.”

“As soon as there is a way for me to leave I will go, and I want to send my sons outside if they get the chance,” he added.

There is a palpable sadness when conversation drifts to the future of Christianity in Gaza, and there’s anger, too. A community that has survived two centuries through times of war and natural disasters now feels like it is on its last legs.

“We don’t want to leave, but we are forced to because of the economic and political situation here,” said Luzil Asaree, a worshiper sitting in the courtyard of the church after the service. “It’s sad, Christians have been here since the beginning of our religion.”

The Christian population in the West Bank has also been on the decline for similar reasons, said George Abueed, a Palestinian-Christian from Bethlehem.

“Palestinian Christians … receive no tolerance or mercy from the Israeli occupation. Their land has been confiscated, their houses have been destroyed, and they have been subjected to daily humiliation on checkpoints when they travel,” he said. “Same discriminatory measures for everyone. Christians and Muslims.”

That claim of discrimination by both religious groups in Gaza has led to a feeling of unity. During the 2014 war, the Church of St. Porphyrius was opened up by the Christian community as a shelter for hundreds of Muslims. In addition, many Christians said they feel respected under Hamas’ rule, and that the militant group regards them as an important religious minority.

“The government here has helped us, and we can go to them if we have problems,” Jilder said. “We face the same problems, the same bombs.”

With three devastating wars in a decade and the ongoing blockade, the vulnerable community believes it is losing about 5% of its population each year. Those leaving are mainly young Christians with limited job opportunities who are jaded and traumatized by war and hoping to start a new life.

Ibrahim Tarazi, a engineering graduate, said he is one of those waiting to leave. “I am trying to find any way to get out. All the youth are suffering here, all of them are trying to leave.”

Still, the thought that the Christian population could be gone in a decade or two pains him.

“Nobody would leave if we had a life here,” he said. “If the situation remains the same then the numbers will keep going down, but I can’t see any future where it is better.”